Do you need a unique moniker for someone special in your life? Then have a look at our selection of flower nicknames, which are ideal for everybody, but especially for girls.

Flowers are a symbol of happiness and create a positive vibe in any environment. Flowers are also a part of religious prayers, and we can’t expect such an occasion without them.

Due to the specialty of flowers, people have begun to utilize their names as baby names and nicknames. So, without a doubt, choosing a flower nickname for your special one was a wise move.

Let’s get started without further ado.

I’m going to give some lovely flower names that would make great nicknames, as well as some information about the blooms, so you can simply choose which one to use.

Ajisai: Ajisai is a Japanese term that means “hydrangea.” The word refers to a group of flowering plants in the Hydrangea genus that are commonly grown as garden plants in Japan.

Allium: Allium flowers are members of the Amaryllidaceae family of ornamental plants. Allium derives its name from the Latin word for garlic, which belongs to this genus. These aromatic flowers come in many different colors, styles, and sizes.

Alyssa: Alyssa flower is a beautiful, elegant flower that is most common in the north. It sprouts from a bulb and usually grows to roughly two feet tall.

Amaranth: Amaranthus, or Amaranth, is a genus of flowering plants in the family Amaranthaceae. There are about 180 species in the genus.

Anemone: The Anemone flower is a lovely, fragile, and colorful bloom that grows in arid areas. They bloom in the springtime and grow from a bulb.

Arbor: Arbor flowers are a flowering plant species in the genus Thunbergia. These plants produce large, showy, and brightly colored flowers which can be seen throughout the Southern United States.

Aster: Aster is a genus of about 200-220 species of flowering plants in the family Asteraceae. Asters come in a range of colors and include many popular garden plants such as Goldenaster, Purple Aster, and Michaelmas Daisy.

Azalea: Azaleas are flowering shrubs that are most common in the United States, Japan, and China. They bloom from late winter until spring.

Bergenia: Bergenia is a genus of flowering plants in the family Saxifragaceae. They produce small, waxy, white flowers in the spring.

Bletilla: The Bletilla flower is a small perennial that is known for its pink petals. It grows in Japan, China, Korea, and Taiwan.

Bluebell: The bluebell is a member of the genus “Hyacinthoides”, part of the family Asparagaceae, and it is a small, delicate flower that grows in early spring. It has a soft, sweet fragrance.

Bluestar: Bluestar is a beautiful flower with a lovely scent and unique color. It grows best in the Northern Hemisphere and can be found in many parts of North America.

Buttercup: Buttercup flowers are common in the springtime. Buttercups get their name from their yellow or golden blossoms that look like a ball of butter.

Calla: The calla lily, also known as the calla or arum lily, is one of the most popular flowers because of its elegance and simplicity.

Chicory: The chicory flower is a perennial plant that is native to the regions of North Africa, Europe, and Asia. Chicory has been used as a coffee substitute since the 19th century.

Clover: Clover is a lush, green plant with small white flowers that grow in clusters. It is found throughout the United States and thrives in moist, sunny areas.

Crocus: Crocus is a genus of flowering plants in the iris family. The flowers of these plants are mostly purple, blue, yellow, white, and sometimes pink in color.

Cynthia: The flowers are in different colors, but most of them are pink in color.

Dahlia: Dahlia is a genus of flowering plants and these are notably cultivated for their showy flowers of white, yellow, orange, or pink.

Daisy: Roses are red, violets are blue. But what about daisies? Daisies come in a variety of colors and shapes. They can be white, yellow, or even pink.

Erica: Is a flowering shrub.

Flora: Flora is the name given to the plant life that grows in a region. It may refer to all plants or only the flowering plants.

Freesia: Freesia is one of the most popular flowers. It’s known for its sweet, delicate fragrance. Freesia flowers are available in a variety of colors and sizes.

Fuchsia: Fuchsia is a genus in the family Onagraceae, comprising about 105 species. They are mostly shrubs and small trees.

Hebe: Hebe is a genus of flowering plants in the family Plantaginaceae.

Hazel: Hazel is a flowering plant that bears yellow or cream flowers.

Himawari: Its name is derived from the Japanese word for sunflower, “Himawari.”

Hosta: Hosta is one of the most popular garden plants and will bloom in midsummer with white, lavender, blue, or purple flowers.

Iris: Iris flowers are best known for their beautiful colors, which range from gold to blue, purple, yellow, and orange.

Ivy: Flower ivy blooms in late May-early June with white flowers that are often tinged with pink on the outside.

Ixia: The genus Ixia is native to South Africa and part of the iris family.

Ixora: Ixora is a flowering plant that has a variety of different colors and flower shapes. It is a tropical plant.

Jasmine: Flower jasmine is a kind of white flower with a strong and pleasant fragrance. It can be found in Asia and Europe and has been used for centuries as an aromatic and medicinal plant.

Need more flower nicknames, have a look at the below list.

I hope you have got your nickname from the above flower nicknames. Thanks for visiting. 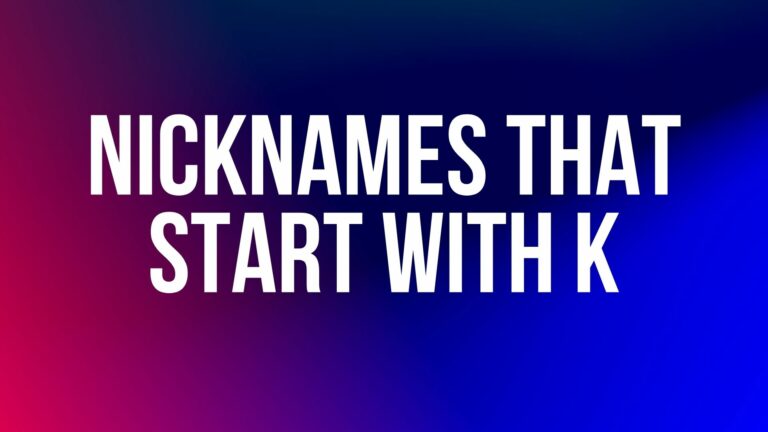 Looking for nicknames that start with k to surprise your special in your life? Then this list of cool and funny nicknames will be your first choice. It seems you are confident in the selection, or there must be some specialty behind this particular nickname. Whatever it is, I’m here to provide you with the… 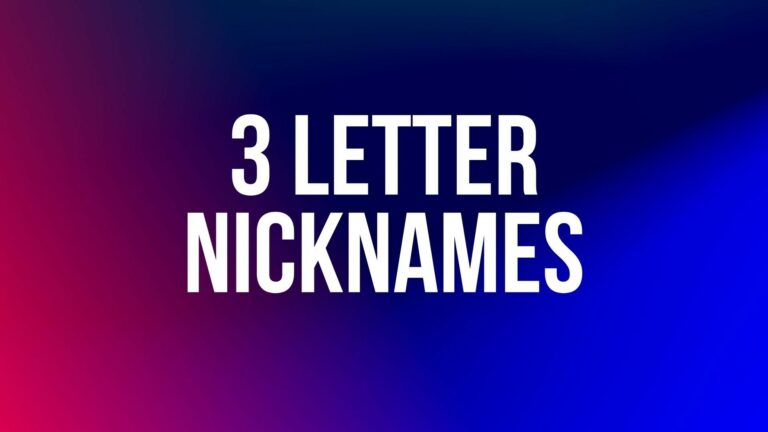 Looking for 3 letter nicknames to gift a short and cute nickname to your special one? We have 100+ nicknames for you. Three letter nicknames are too short, very simple to pronounce, and easy to remember. But the problem is these are difficult to find and frame as these consist of only three letters. But… 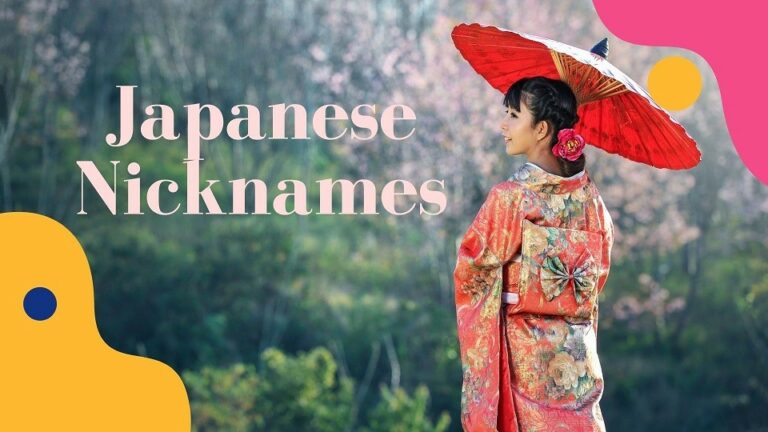 Hey, looking for cool Japanese Nicknames to show your endearment to someone? Look for no other choices because I have enlisted amazing nicknames inspired by Japanese that help you find a perfect nickname for your special one. You made the best decision by opting for Japanese nicknames, as these are unique compared to regular ones…. 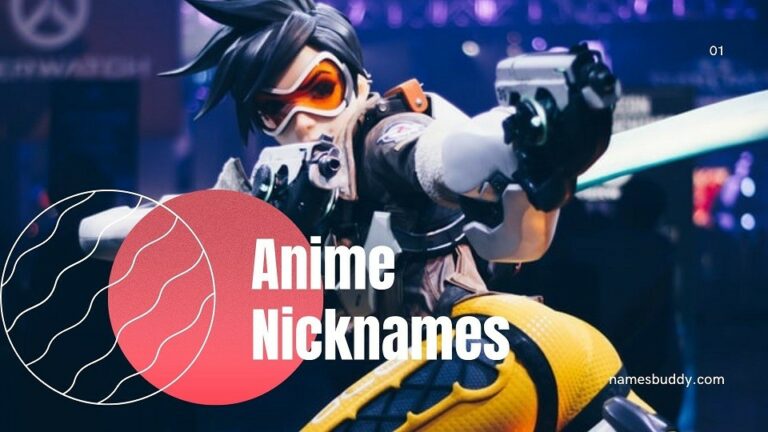 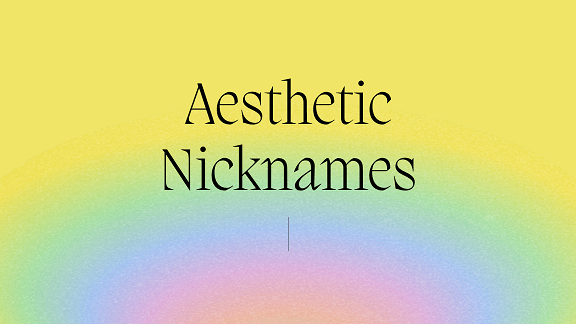