Choosing a perfect last name is somewhat difficult when we don’t have more options, and the same also can be happened with your choice.

And you should be diligent when choosing a last name, especially when it’s for the first name, and it has become quite common to use last names as first names for babies.

Everyone wants their last name to be powerful and strong; sometimes, it depends on why you are choosing. If you are looking for a last name for a novel character, obviously, the last name should be related to the nature of the character.

And if you need a last name for a username or gamertag, you can change your mind based on the options you have.

We have many last names but finding their meanings is challenging and time-consuming if you need last names with particular meanings such as light.

There are not many last names meaning light, but I have tried my best to provide you with as many as possible. Without further ado, let’s get started.

Light: It is a variant of lyght, light, and it means happy, a cheerful person from Medieval English. This was first used as a nickname for happy and jovial persons. In Old English, it was the form of leoht, which means bright, and cheerful.

Chiaro: This is an Italian last name, and it was derived from the word Chiari. It was first used as a nickname for people who have fair and bright looks. This last name means light, fair, famous, and luminous.

Lite: This last name is from the ancient Anglo-Saxon culture, and it is from the Old English word leoht, which means bright and light.

Licht: It has footprints in three origins, German, Jewish, and Dutch. It is mainly famous as a Jewish surname that means light.

In Dutch, it’s a nickname for persons with fairly thin and delicate-looking bodies and an occupational name for a chandler in German.

Spera: It has different variants such as Speirs, Spier, and Spear, and it was used as a nickname for tall, thin persons or skilled spear users. It’s also a Southern Italian nickname that means ray of light.

Rayos: It’s a Spanish family name that means ray of light or lightning, and it was used as a nickname for active and cheerful people.

Abner: It is also a personal name, and it is a Biblical name meaning God is light; this is famous among New England and southern states.

Lucero: It is from Spanish, and it’s derivative of luz which means light, and other meanings include star, morning, or evening star.

Claro: It has roots in Spanish and Portuguese, and it means light and bright.

Blitz: It’s a German and Jewish family name; in German, it means lightning, and it was assumed to be used as a nickname for a fast runner.

Urias: The English form of this Spanish name is Uriah, which means God is light, and it’s a Biblical name and a Hispanic surname.

Dia: It’s an Arabic surname, and it means light, glow, and illumination.

Noor: It is also an Arabic surname that means illumination and light.

Leclair: The surname Leclair originated from the French word Clair, which means light or bright.

Melchoir: It has several origins, such as German, French, Spanish Dutch, etc., and in Hebrew, ‘Melech’ means king, and ‘or’ means light or splendour.

Fackler: There are two possibilities for this last name, one is torch makers’ occupational name, and the other one, it’s a name for torch-carrier. It’s a German last name.

Luz: It’s a surname from Portuguese and Spanish which means light. This surname is also a feminine given name.

Prakash: It’s an Indian last name, and it means light.

Leger: It has roots in French, English, and Dutch. In French, it means light, and in Dutch, it’s an occupational name for a tax collector.

Meyer: It’s the last name from German, Dutch and Jewish, in German and Dutch; first, it was used for the steward and later for the tenant farmer.

Originally, it was used to denote the village headman. In Hebrew, it means enlightener or light.

Lichtenberg: It’s a German and Dutch last name, and it used to be a habitational name. In Lichtenberg, Licht means light and berg means hill.

Zohar: It’s a Hebrew name and surname which means radiance, and splendor.

Finding last names with specific meanings is a more difficult task than finding common last names, so it took me more time to craft this list of last names for you. Now, without further ado, let’s get into the topic.

Azar: This last name is also a personal name that means fire, flame, and shine in Persian, and this is a unisex name. It also refers to the ninth month of the Solar Hijri calendar.

Brand: This surname has different origins, such as German, England, Netherlands, etc. It’s the Germanic short form of the personal name Brando and it means sword.

In Swedish and Jewish, it’s the ornamental name, which means fire. And some of the last names with Brand are Brander, Brandsma, Brandt, and Brandvold.

Brandel: It’s another form of the last name brand that means fire and is also a habitational term for someone from a place having the brand in its name.

Brantley: It’s the Americanized form of the German last name Brandle or Brandli, in which brand means fire.

And also, it’s a topographic name for someone who lives in a burned-out section of town. And similar last names are Brantner, Brendlinger.

Brenton: It’s an Old English surname, and it denotes that people with this last name have ancestors from a place called Brenton.

Brenton means Bryni’s homestead, and Bryni means fire and flame. Some of the similar last names are Brent, and Brinton.

Eld: It’s from the Old Norse name eldr which is an ornamental name that means fire, flame.

Elden: It’s a habitational name derived from eldr, which means fire. Elden is also a personal name of English origin, and it means noble friend.

Fayer: It’s from the Yiddish origin name Fayer which means fire. In the English origin, it’s generated from the word fair, which means beautiful or handsome.

Feuer: It’s an ornamental name from German, which means fire, and ancestors with this surname were the shedders of light.

Fuoco: It has origins in Italian and Latin; in Italian, it means fire, and in Latin, it is the fireplace.

Hayes: It originated from the Gaelic last name O hAodha, and Aodh means fire. Hayes is also a boy’s name, and it means hedged area.

Hugh: In Ireland and Scotland, this surname is considered as the equivalent of Aodh, which means fire, and this is also famous as a boy’s name.

Keegan: It is both a surname and a personal name. It means son of Aodhagán, and we already know Aodh means fire. This name is often used for boys, but it has become gender-neutral.

Kurnik: This Austrian last name evolved from the name kuriti, which means “to make fire.”

Laflamme: It might be the occupational name from French for a torchbearer, and flamme means fire.

McKay: It’s the surname from Ireland and Scotland. It’s the English form of Gaelic Mac Aodh, and Aodh means fire.

Zapalac: It’s a nickname for arsonic, which means a person who starts a fire to destroy something, and it evolved from zapalovat, which means “to set fire to.”

That’s all for last names that mean light, fire, and moon. There are only fewer last names on this, and I have included the maximum last names for you. Thanks for reading, have a good day. 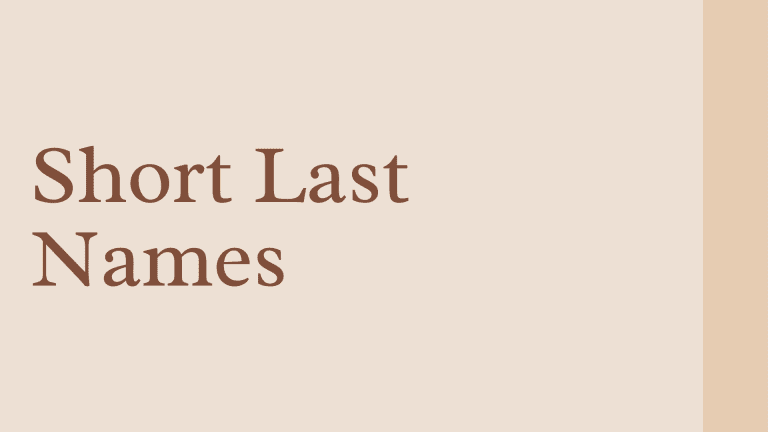 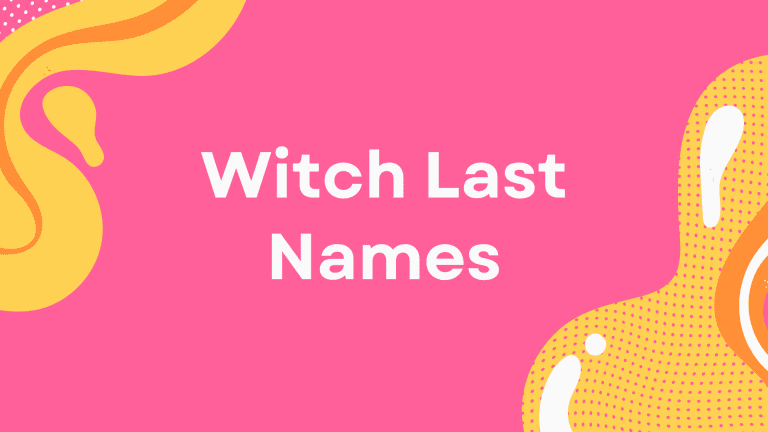 Are you browsing for a list of witch or witchy last names to pick the perfect last name for your witch character or Halloween costume? If so, I have a 100+ cool witch last names list that will help you get your required last name. In the fantasy world, a witch is a woman who…

I know you are looking for last names that end with son; if yes, this post is for you. Last names have always been an essential part of our lives because they can tell us a lot about our families and where they came from, and they can also help distinguish the people. There are…

Are you browsing for last names that mean water to pick a nature-inspired name? If yes, you are in the right place to get them. Everyone has a family name or last name, which we inherit from our ancestors, and one cannot simply change it because it’s one’s identity and heritage. But; now, people are…

Looking for cool anime last names? We’ve got you covered! In this article, we’ll show you 110+ last names that are anime-inspired that you can use or give to your character. If you are an anime lover, you are definitely familiar with anime names and the last names of characters. Anime is more than just… 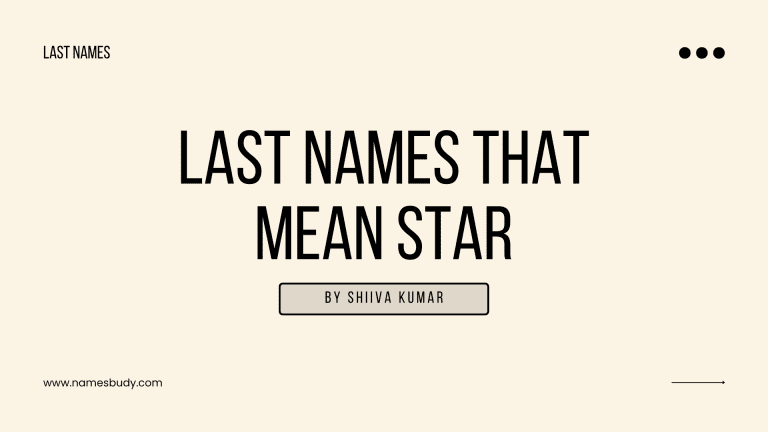 Are you looking for a list of last names that mean star? If so, you are in the right place, as I’m covering them in this post. So, without further ado, let’s get started. The last names are an integral part of everyone’s life as they are our identity. They help find a person’s family…