If you are looking for Biblical boy names to finalize your baby boy’s name, here we have a collection of 300+ beautiful names to simplify your work. Bible consists of religious content that is sacred to Christians, Jews, and others, and it is a big source of inspiration.

Bible is a holy source for baby names; in the Bible, there are Prophets, Priests, Kings, Angels and Apostles of Jesus, etc. Therefore we can easily grab a good name from the Holy Bible.

Some think that Biblical names are getting old and regular as many people use them, but that is a total misconception; biblical names are evergreen. For every new couple, the Bible is the first and foremost source for naming their baby. Biblical names have domination all over the US.

According to the Social Security Administration, US, the top 10 baby names(male) in the year 2019 are Liam, Noah, Oliver, William, Elijah, James, Benjamin, Lucas, Mason, and Ethan. And the great thing is that the 6 names out of the top 10 baby names are biblical names only 4 names are from outside the Bible those are Liah, Oliver, William, and Mason. Based on this, we can know the greatness and demand of biblical names still in 2020.

Based on the report from Social Security Administration, US, among rank 1 names from the last 100 years, biblical names took first place in almost 80 years. But in recent years, from 2016 to 2019, Liam took over the first rank; even after that, majority domination is from biblical names.

Compared to the old testament of the Bible, the new testament is a treasure of amazing names that are well apt for this generation. Almost every biblical name has its forte and astonishing meaning. So biblical name could be a great choice for naming your baby boy; your little one with those chubby cheeks, tiny fists, and big eyes deserves a splendid name. Now we get into the list of names.

Aaron: He is a Prophet, and the name means strong

Hanun: King of Ammon and it means mercy

Caesar: It is derived from Roman general Julius Caesar’s name, and it is used by Roman emperors.

Nimshi: No clarity on details, might be Jehu’s father

Sivan: It is a month name

Adna: He is a Priest

Mishael: Uzziel’s son and it means who is like Yahweh

Ahian: This name is mentioned only one time in the Bible, Manasseh’s descendent

Caleb: Belonged to a tribe of Judah, and the name means bold.

Kishon: Is a river

Elhanan: Son of Jair and the name means grace

Rosh: One of Benjamin’s sons

Sachia (Sakia): He was mentioned as Shaharaims’ son

Abidan: He was a judge, and the name means father of judgment

Elias: Prophet and it means Jehovah is God

Kanah: It is a stream

Lael: Eliasaph’s father and it means belongs to God

Jahiel: There are 14 people with this name and some are Elam’s son, the Levite musician

Kelita: He was a Levite

Kemuel: Nahor’s son and it means God raised him

Michael: One of 12 Spies and it means who is like God

Elijah: Same as above (Elias is the Greek form of Elijah)

Hara: A place mentioned in the Bible

Jareb: Mentioned in old testament and it means he’ll struggle

Elon: A member of the Zebulun tribe

Melchi: Addi’s son and it means my King

Nahash: A King and it means serpent

Elika: Also called Alika and is a village, it means God’s pelican

Omar: Eliphaz’s son and it means the speaker

Luke: An Evangelist and form of Lucas

Rufus: A Christian of the 1st century and it means red

Ashur: Noah’s son and Assyrian’s God and it means force

Raphah: Bejamin’s son and it has several meanings one of them is relax

Raham: Shema’s son, it is an Arabic name it means mercy

Cherith: A name of the seasonal valley.

Enon: Also called Aenon, it is a place, and it means cloud

Epher: Grandson of Abraham and the name means lead, dust

Chilion: Son of Elimelech and the name means complete.

Felix: Procurator and it means happy.

Ephah: Midian’s son, and it is an ancient measure

Elkanah: Hannah’s husband, and it means God has created.

Adriel: Nobleman and the name means God is my aid

Clement: He is a saint of Rome and means mild.

Festus: Procurator and it means prosperous

Coniah: King of Judah, and it means the Lord’s strength

Eliphaz: Son of Esau and it means God’s endeavor

Abida: Son of Midian, means worshipper, and it is a feminine name in Arab.

Ezer: A place of community settlement

Abihu: Son of Aaron and my father is God

Gispa: Gishpa, name of a leader, minor mention in the Bible

John: Saint and it means Yahweh is gracious

Joah: Asaph’s son and it means God is his brother

Dishan: Son of Seir the Horite, and it means a threshing

Daniel: Noble youth of Jerusalem and means God is my judge.

Amon: Kong of Judah and it means true.

Joel: Prophet and it means Yahweh is God

Jotham (Yotam): Gideon’s son and it means Yahweh is perfect

Benoni: Another form of Benjamin, Rachel’s son, and the name mean pain.

Heman: A Levite and means faith

Matthan: Jesus’ patrilineage according to Matthew

Igal: Joseph’s son and it means he redeems

Mashal: A parable and in Arabic it means light

Gershon: Son of Levi and it means stranger

Jadon: A Prophet and it means a judge

Jachin: Copper pillar and it means he establishes

Lior: Jewish name and it means my light

Abdon: He is Micah’s son

Gihon: Name of a river

Hasupha: Name of a clan

Hiel: He rebuilt the Jericho

Abdi: A name from the old testament and it means Yahweh’s servant

Hagab (Agabus): He is a Prophet as per the new testament

Arnon: It is a stream name

Arioch: He mentioned in the book “King of Ellasar”

Uphaz: Another form of Ophir

Bethel: Name of a place

Yohanan: Another form of John

Eben: A location mentioned in the Bible

Arba: He is mentioned in Joshua’s book and in anakites, he is known as the greatest person

Cabbon: A place name mentioned in the Bible

Rezin: A King and the name means messenger

Hanoch: Son of Midian and it means dedicated

Aquila: A name from the new testament and it means eagle

Yonah: He is a Prophet and it means dove

Jabez: Ancestor of Judah kings and the name means he makes the pain

Mahath: A Levite and it means breaking

Abaddon: An Angel’s name and it means destruction

Azmon: A site name and it means strength

Asa: A King’s name mentioned in the old testament and it means strong

Abiah (Abijah): This name is used for both male and female and the name means My father is Lord

Abraham: He is a Patriarch and it means father for many

Conclusion: I hope this list of biblical boy names brought a smile on your face. Kindly share with others.

Note: If you like any name from this list don’t forget to check with other sources also and after getting clear information go with a name. We are not responsible for any of your decisions. 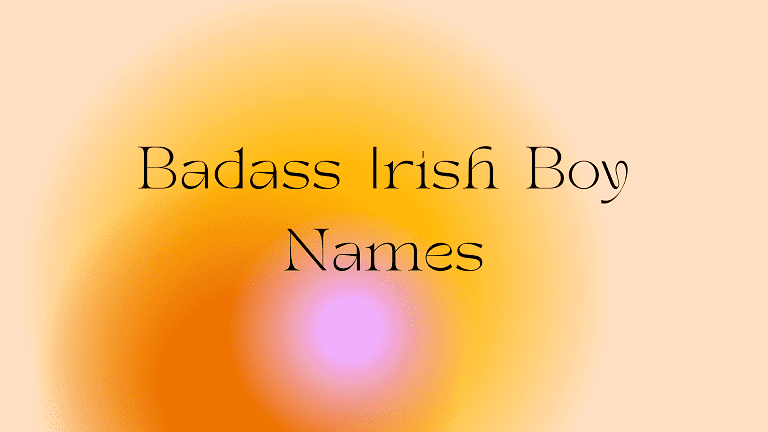 If you are looking for badass Irish boy names to name your cute little joy, we have got you covered in this post. Baby naming is one of the best gifts anyone can get in their life, and every parent feels excited to find a perfect name for their baby. Nowadays, Irish baby names have…